A HILLMORTON man who ignored a council notice ordering him to tidy up his overgrown gardens has been handed a £610 legal bill. 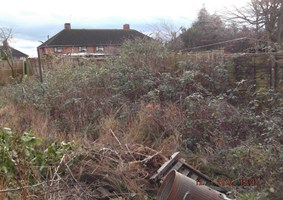 Andrew Davies, of Chamberlain Road, pleaded guilty at Nuneaton's Warwickshire Justice Centre on Tuesday (12 April) to failing to comply with the Section 215 notice.

The notice was served on Mr Davies after the council's planning enforcement team received a complaint from a member of the public about the state of his property's gardens.

An officer first visited the 63-year-old's home in October 2015 and found the front garden was untidy and in need of mowing, while the rear garden was severely overgrown - impacting on the amenity of both his and neighbouring properties.

Following the visit, the officer wrote to Davies to advise him he had 28 days to return the gardens to an acceptable standard or risk enforcement action.

After the 28 day period had expired, the officer returned to Davies' home to find no work had been carried out, so on 10 November Davies was served with a Section 215 notice - ordering him to cut down and remove the vegetation from his gardens or face prosecution.

The notice set a deadline of 9 January for the work to be completed, but when the officer visited three days after the deadline only a small amount of work on the front garden had been done.

At Tuesday's hearing, Davies told magistrates he had failed to fully understand the requirements of the notice and the dates by which the work had to be completed.

He added it was dark by the time he returned home from work, preventing him from working on the gardens, and he had problems with sleeping and other health issues.

Speaking after the hearing, Rob Back, Rugby Borough Council's head of planning, said: "Homeowners have a responsibility to maintain properties to a satisfactory standard, both for the amenity of the property concerned and the amenity of neighbouring properties and the wider community.

"While our planning enforcement team always try to resolve such cases through constructive dialogue, when an informal approach  fails to resolve a problem we're ready to use the legal powers at our disposal."

Residents can report planning enforcement concerns to the council by calling (01788) 533759 or emailing rbc.planning@rugby.gov.uk

Photo caption: Hillmorton man Andrew Davies was handed a £610 legal bill after ignoring a council notice to clear up the gardens at his property.