THE Mayor of Rugby joined residents and guests at a special celebration to mark the official opening of Newbold's Centenary Park. 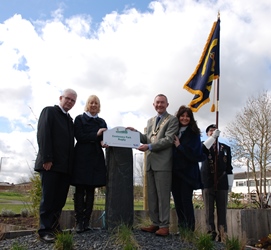 The project to transform the former allotment site off Parkfield Road into a flagship green space was spearheaded by Rugby Borough Council and the Newbold-on-Avon Community Partnership.

And at today's (Wednesday 30 March) celebration the park was awarded Centenary Fields status by Fields in Trust - protecting it for generations to come in memory of those who died in the First World War.

The ambitious plans to create Centenary Park were drawn up after 37,000 square metres of land was returned to the council following the construction of the town's Western Relief Road.

The project secured more than £200,000 from the Landfill Communities Fund (LCF), including a £100,000 grant from the Veolia Environmental Trust to create the park and wildlife zones.

In addition, the Woodland Trust supported the project by donating more than 5,000 trees.

Cllr Lisa Parker, Rugby Borough Council portfolio holder for sustainable environment, said: "The former allotment site had remained untouched for more than a decade when work started on this major project and it's a real tribute to the vision and dedication of our parks and grounds team these ambitious plans have been realised.

"By working with the Newbold-on-Avon Community Partnership, and with the generous support of our funders, we have created a wonderful green space for Newbold residents and the wider community to enjoy for generations to come."

Cllr Claire Edwards, ward councillor for Newbold and Brownsover and one of the founders of the Newbold-on-Avon Community Partnership, said: "Through working with the partnership, the council has involved Newbold residents in this project every step of the way.

"The transformation of this land has been remarkable and I'm delighted we now have such a wonderful place for the community to enjoy."

Pupils from Newbold's Riverside Academy were invited to choose the name of the park, and selected Centenary Park to commemorate the 100th anniversary of the start of the First World War, which coincided with work beginning on the site in 2014.

The official opening celebration included music, a bouncy castle, outdoor gym sessions and the cutting of a cake.

The Mayor of Rugby, Cllr Richard Dodd, was joined at the event by Rugby MP, Mark Pawsey, and representatives from Fields in Trust and the Veolia Environmental Trust.

Helen Griffiths, chief executive of Fields in Trust, said: "The Centenary Fields programme is a fitting way for us to mark the sacrifices made by so many in World War I whilst looking to the future through a living remembrance.

"We are delighted Rugby Borough Council has embraced Centenary Fields, commemorating the centenary for the residents of Newbold in a way they can appreciate forever.

"We look forward to many more landowners following their lead."

Paul Taylor, executive director of the Veolia Environmental Trust, said: "The opening of this new park is great news for Rugby and its residents. I hope it becomes a focus for relaxation and fun for people of all ages.

"It is an excellent example of how the LCF contributes to the creation of much-needed amenities in our towns, cities and villages. We alone have contributed £2.7 million to projects in Warwickshire since 1998 and we look forward to supporting more."

Joe Newby, grant manager for WREN, said: "It's wonderful to see Centenary Park open and ready to make such a difference to the community and residents of Newbold and, indeed, the rest of Rugby.

"WREN is always happy to consider grant applications for projects that benefit local communities and this is a great example of what can be achieved."

Marianne Ivin, of SITA Trust, said: "This project has been a great collaboration to be part of and clearly shows how the LCF can work at its best.

"We hope the public really enjoy this vibrant space and congratulate Rugby Borough Council on their management of such a great project."