RUGBY Borough Council has backed the national Clean for The Queen campaign. 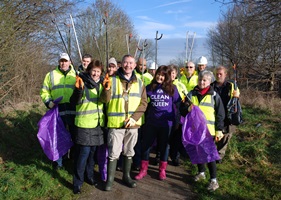 The campaign aims to recruit an army of volunteers to help give the country a spring clean ahead of the Queen's official 90th birthday celebrations.

Councils, voluntary organisations, schools and communities have been urged to sign up for Clean for The Queen, which has been backed by Keep Britain Tidy.

A nationwide Clean for The Queen weekend takes place from 4 to 6 March, but volunteers can pitch in and organise a litter pick from now until the Queen's official birthday in June.

The council started the ball rolling in Rugby with a volunteer litter pick on the Great Central Walk, off Abbey Street.

And the council has urged schools, community organisations and residents to support Clean for The Queen by organising litter picks across the borough.

Cllr Parker said: "The council invests a considerable amount of money in our street cleaning services, but the whole community has a role to play in helping to keep our borough litter-free.

"More than two million pieces of litter get dropped on UK streets every day, resulting in a considerable cost to the environment and the taxpayer.

"By supporting the Clean for The Queen campaign, we hope to highlight the issue, encourage community action and play our part in paying a fitting tribute to Her Majesty's dedicated service to this country."

You can register a Clean for The Queen litter pick by visiting the campaign website - www.cleanforthequeen.co.uk

Litter pick organisers can also contact the council's environmental protection team to arrange for the rubbish to be collected following an event.