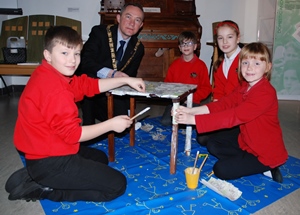 Pupils from Clifton-upon-Dunsmore Primary School attended a special workshop on Wednesday (27 January) to learn about the Holocaust and create collages of words and pictures inspired by the theme of this year's Holocaust Memorial Day - 'Don't Stand By.'

The theme focused on how bystanders enabled the horrors of the Holocaust and subsequent genocides to take place - an idea explained by Holocaust survivor Elie Wiesel: "We must always take sides. Neutrality helps the oppressor, never the victim. Silence encourages the tormentor, never the tormented."

The pupils' collages were glued on to tables and chairs - inspired by The New Arrival, an artwork by Rugby-based Works4Me which was one of a dozen works commissioned by the Holocaust Memorial Day Trust for the Flames for Humanity's Heroes project.

The New Arrival, which was exhibited in London on Holocaust Memorial Day, was inspired by the story of Sydney and Golda Bourne, who saved the life of Jewish German girl, Susanne Flanter, by offering her a home in London during the Second World War under the Kindertransport programme.

The art work features a family dining room with a menorah placed on the table, a chair covered with maps of Germany and a picture of Sydney and Golda Bourne on the wall - illustrating Susanne's Jewish German roots in her new London home.

Rugby Art Gallery and Museum, which supported Works4Me in its bid for the commission, plans to put the piece on display later this month.

During the workshop, pupils also met Thea Coleman-Tielrooy, a Rugby resident who survived the Nazi occupation of the Netherlands during the Second World War.

Thea told her inspirational story in a book, Evading The Gestapo In Holland, and has lent a number of photographs and personal belongings to the Museum for a new exhibition.

Thea spoke about her experiences and answered questions from the pupils and Cllr Richard Dodd, the Mayor of Rugby.

Cllr Dodd said: "Holocaust Memorial Day encourages us to learn the lessons from one of the darkest chapters in humanity's history while pledging our support to build a better future.

"I was delighted to attend the workshop at Rugby Art Gallery and Museum and join the pupils from Clifton-upon-Dunsmore Primary School in learning about the inspiration behind Works4Me's art work.

"It was also a privilege to meet Thea Coleman-Tielrooy and hear first-hand her experiences of surviving the Nazi occupation of the Netherlands."