CALDECOTT Park has been nominated for the UK's Best Park title at this year's Fields in Trust Awards. 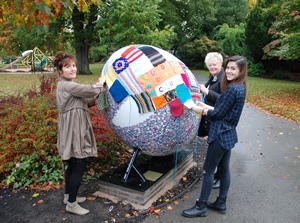 And residents can vote for Rugby's premier park to win the award by visiting the Fields in Trust website.

The nomination crowns a triumphant year for Caldecott Park after it secured the prestigious Green Flag Award for an eighth year in a row and helped Rugby take overall gold at the Heart of England in Bloom Awards.

Residents can vote for Caldecott Park to win the UK's Best Park award at www.fieldsintrust.org

The online vote closes at 5pm on Wednesday 25 November.

Caldecott Park has also been shortlisted for the award to honour the best Have a Field Day event staged to celebrate the Festival of Rugby.

The Festival of Rugby was organised by the Rugby Football Union and England Rugby 2015 to celebrate the Rugby World Cup, and the Have a Field Day award honours community events staged in parks during the festival.

Caldecott Park's event was a collaboration with arts collective Kookooshaboo, who 'yarn bombed' the park as part of the Rugby's Got Balls project.

Kookooshaboo joined forces with a host of community organisations to cover the park's giant rugby ball sculpture, trees and benches with specially knitted and crocheted pieces of yarn.

The Fields in Trust Awards take place on Wednesday 2 December at Lord's Cricket Ground in London.

Cllr Lisa Parker, Rugby Borough Council portfolio holder for sustainable environment, said: "The nomination for UK's Best Park rounds off a tremendous year for Caldecott Park and is a real tribute to the hard work and dedication of our parks and grounds team.

"I'd urge everyone to visit the Fields in Trust website and cast their vote for Caldecott Park before the deadline on 25 November."

The national Fields in Trust charity works to safeguard parks and green spaces for sport, recreation and play.