HUNDREDS of rugby fans flocked to the town centre on Sunday when the Webb Ellis Cup visited the birthplace of the game. 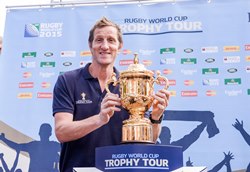 Rugby's greatest prize went on display at the town's official Fanzone in Old Market Place - and dozens seized the opportunity to take a photograph of the famous trophy, which was accompanied by rugby legend Will Greenwood, a member of England's triumphant Rugby World Cup team in 2003.

Players and supporters from all of the town's rugby clubs formed a guard of honour to welcome the Webb Ellis Cup as the trophy made its way from Rugby School to the Fanzone.

The crowd gave a rousing rendition of Swing Low, Sweet Chariot when the trophy arrived, while Bilton Silver Band played a selection of music throughout the trophy's stay.

View more photos from the Fanzone

During the event a number of junior players from the town's rugby clubs gave a skills showcase on a specially laid artificial pitch.

The visit of the Webb Ellis Cup to the birthplace of the game started the official countdown to Rugby's World Cup celebrations.


On 17 match dates the Fanzone shows games live on a giant screen, kicking off on Friday 18 September when England take on Fiji at 8pm in the opening game of the tournament.

When the World Cup action takes a break, the Fanzone becomes the Rugby Village, hosting a packed programme of entertainment and events as part of the Enjoy Rugby Festival.

The festival runs from 12 September to 6 November, with full details of all events - and the matches being screened in the Fanzone - available in the Enjoy Rugby Festival guide and online at www.enjoyrugby.co.uk

Photo caption: England World Cup winner Will Greenwood was reunited with the Webb Ellis Cup at Rugby's Fanzone on Sunday.